Marcus Van Buren\’s ghostly family has been a thorn in his backside since the day he was born.

Now he\’s paying someone to get rid of them.

Inexperienced ghostbuster Daisy Malone should be ecstatic the ultra-wealthy tabloid darling, Marcus Van Buren, is paying her big bucks to conduct a sham of an investigation. The windfall will bail her family out of financial ruin. According to Marcus, all she has to do is tell the truth and sign a document swearing the old family home, Laguna Vista, is 100% ghost-free.

Read on for Prologue 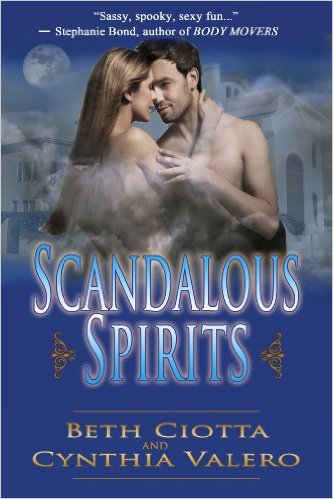 \”Ciotta & Valero’s imaginative and thought-provoking ghost story is vividly concocted. The characters, even the ghosts come alive and jump right out of the pages and into your mind.\” 4 stars, RT Bookreviews

“This book is a blend of romance, comedy, and paranormal hi jinks. I can honestly say that I went from laughing out loud, to crying, back to laughing. The characters are very well written and provide some super funny moments, but will tug at your heartstrings too.” Amazon reader review

\”Fast moving and flat-out funny, the action draws you in at the same time that the characters make you laugh out loud. Daisy and Marcus are to die-for. Daisy\’s family members are as charming as they are quirky and Marcus\’s right-hand-man Rufus is so sexy, you\’ll be as thrilled as I am that he\’s getting his own book.\” —Amazon reader review

Jonas Van Buren shook his head as his cantankerous younger siblings launched into yet another verbal tussle. In confounding “hereafter limbo” since 1928 and they were still at it. Some things never changed. “Lay off, you two. Bickering won’t solve our plight. In fact, it’s what got us into this mess in the first place. Or have you forgotten?”

“If memory serves,” Isadora drawled, flicking her ashes into an etched blue crystal bowl, “Jimmy’s lousy driving got us into this mess. He’s the one who steered the Pierce-Arrow off the bridge and into the drink.”

“I was distracted,” James snapped in self-defense, plunking down the deck of cards he’d been fanning and shuffling on the table before them. But when he palmed up the snap-brim of his brown felt fedora, guilt plagued his handsome, boyish features.

“I know you were, sweetie,” Isadora quickly amended, her cupie-bowed lips drawing into a contrite frown. “I’m sorry.” Suddenly morose, she added, “If anyone’s to blame, it’s me. I’m the one who talked you and Jonas into staying late at the speak-easy.”

“You didn’t talk us into anything, angel,” Jonas said, sorry he’d introduced the subject of their physical demise in the first place. “It was a collective decision, remember? All for one and one for all.”

James’s mouth slid into a lopsided grin upon hearing their childhood oath. “You said it!”

“And how!” Isadora exclaimed, her ruby red lips curving back into a smile.

Grateful for their easily restored humor, Jonas smiled as well. Smoothing the shawl collar of his double-breasted vest, he returned then to his usual post: the arched glass window of the secluded west tower of Laguna Vista, the infamous Van Buren Estate. Or as they’d come to refer to it as of late, the Van Buren Prison.

He braced his palms on either side of the sash and looked out in disgust over the unkempt grounds. Gnarled brambles and rampant sea grass thrived in place of sculptured hedges and exotic roses. The once immaculate lawn of the Spanish-style mansion was no longer green but brown, and littered with rocks and empty liquor bottles. Or as Isadora so colorfully referred to them, dead soldiers.

The former summer home of their parents, the powerful and wealthy department store tycoon Jonathan Bernard Van Buren and his socialite wife Ella, Laguna Vista had been the high-society playground for some of America’s most popular celebrities, not to mention occasional politicians and assorted European dignitaries.

That tragic year James accidentally drove the family’s luxury automobile off a bridge, ending his fast-lane life along with that of his sister’s and brother’s. Of course it had been foggy and he’d been speeding, but as Isadora had said, the fact that they ended up in the bottom of the bay swimming with the fishes wasn’t entirely their little brother’s fault. They’d all been blotto, hopped up on hooch compliments of Isadora’s favorite gin mill. And they’d been bickering. Not that that was unusual. The Van Buren siblings were famous for their caustic, though mostly harmless, tiffs. They loved each other dearly. They just didn’t happen to agree on everything. Strike that, Jonas thought with an amused grunt, they didn’t agree on a lot of things. Like who were the cat’s pajamas? The Yanks or the Dodgers?

The details revolving around the fatal crash and the moments thereafter remained a mystery to the three siblings. One moment they’d been arguing over who would take the World Series in ‘29. The next they were free-floating twenty feet over the murky water, looking on as a fleet of gumshoes fished the dented Pierce-Arrow out of the bay. Seeing their lifeless bodies being pulled from the car was a bit of a shock, to say the least. How could they be dead when they felt so alive? And if they were dead, shouldn’t they be in heaven or hell or . . . something?

“Maybe we’re hallucinating,” James had offered. “That’s what we get for drinking coffin varnish.”

“Don’t be a sap,” Isadora snapped, watching as two meds hoisted her limp, slender form onto a gurney. Pointing a translucent finger at her raccoon-ring-eyed, lipstick-smeared face a short distance beyond, she said, “I’ve been corked on bootleg whiskey more times than I can count, and I’ve never looked as bad as that.”

To which Jonas replied, “Says you.”

Then it occurred to them. They weren’t kickin’ in the physical sense, but spiritually . . .

Jonas recalled Isadora and James launching into a heated debate over the subtle differences between ghosts and spirits, then lapsing into a fit of snorting laughter while plotting the swell tricks they’d get over on their cousins. He even remembered tossing in a few choice pranks of his own. But his most vivid recollection was the heart-wrenching moment they’d sobered up, simultaneously realizing the impact their deaths would have on those they’d left behind. It crushed their fanciful mindset and landed them within the grieving walls of Laguna Vista in the blink of a snake’s eye.

And here they’d been stuck ever since. A problem Jonas had spent the last seventy years trying to rectify. Ghostly limbo wasn’t all it was cracked up to be. Unlike Isadora and James, he’d never reveled in the novelty of being a disembodied spirit. He’d merely tolerated their fate, as he seemed to have no choice. He longed to cross over, to join friends and family members in heaven, or at least to graduate to a higher non-physical plane. However, for reasons that eluded him, the Powers-That-Be turned a consistently deaf ear to his simple request. It was as if he was being punished, but for what? What?

Isadora watched as Jonas’ shoulders sagged in familiar defeat. He was mulling over their fate again. She hated when he did that. It tended to depress him, and she hated anything sad. Sighing dramatically, since it was one of her better talents, she snuffed out her fag after one last drag then rose from the settee to join him. The high spiked heels of her patent leather pumps clicked on the polished marble floor, filling the same silence that had worked her into a lather moments before.

“You know,” she cooed, sidling in beside him, “haunting Laguna Vista was fun for the first sixty years or so, but these last ten years, well, sheesh. I had more fun at my own wake.”

“I know you’re bored, angel,” Jonas replied without cracking the smile she’d hoped for. “Believe me, if I could figure a way to spring us from this joint, I would.”

His brows cut down into a stern vee, the reason as clear as moonshine to Izzy. It baffled him that they could permeate every wall within the seventeen-room mansion like kites through a cloud, but they couldn’t pass through the outer walls to gain freedom to the outside world. She grinned, recalling the time James had tried to escape by jumping out a window while she shimmied up the chimney. Of course, stick-in-the-mud Jonas had taken the mortal route by trying to walk out the front door. All three had hit invisible barriers.

“This is the longest Laguna Vista has remained vacant,” she thought aloud. “And for the death of me, I don’t understand why.”

“No doubt because of us,” Jonas replied, distracted by a late-seventies vehicle rolling to a stop just inside the front gate of the mansion.

“Yeah, Izzy,” James taunted, coming up behind them. “You scared everyone away.”

“Dry up, you two.” Jonas snapped his fingers to gain their attention then motioned them to peer out the window. “Looks like we didn’t scare everyone away.” Gazing past the bug-splattered windshield of the four-wheeled junker, he pinpointed the willowy broad sitting in the driver’s seat. The one with the pert-nose, freckled face, and long blond hair swept up in a playful, bobby-soxer ponytail. He let loose a soft, appreciative whistle. “Lordy, that blonde’s a looker.”

“She’s sweet and all,” James agreed, leering from his third-story vantage point, “but fix your blinkers on the tomato sitting next to her. The one in the short skirt.” He snapped his suspenders and hooted. “Now that’s a choice bit of calico!”

“She’s also a choice bit of jailbait,” Izzy noted. “I’m with Jonas. The blonde is definitely more interesting. Look at how she’s giving this place the once over. She’s moving in. I can feel it! Oh, I do hope she turns Laguna Vista back into a disco. I so loved the music.” She broke into the “Hustle” with an imaginary partner while belting out the chorus of “I Will Survive.”

James rolled his eyes before training them on the blonde. “Nah, she looks more like the bed-and-breakfast type to me. What do you think, Jonas?”

Jonas peered closer, noticing for the first time the logo emblazoned across the long-dented door of the ancient hippie-mobile. Society of Parapsychological Sleuths. An uneasy feeling wound through his gut, the same daunting feeling that tied him in knots whenever he’d had dealings with the IRS. Rocking back on his oxfords, he palmed his hand over his slicked-back hair and sighed. “I think we’re in big trouble.”