A wild west adventure that will rope your heart!

Motivated by a childhood promise, Paris Garrett travels to the wilds of Arizona Territory (1877) to seek fame as a stage actress.  Never mind that she doesn’t possess a lick of experience or that her true passion is songwriting. Before he died, her beloved papa encouraged her to reach for the stars.  She promised to lasso the moon!  She’s already slipped free of her over-protective brothers. Nothing and no one, especially some badge-wearing Romeo is going to rein her in or stand in her way.

Joshua Grant’s life went from diamonds to dust in less time than a rattler strikes.  His uncle was killed, leaving him with an opera house he doesn’t want, and forcing him to quit a the law enforcement job he loved.  The topper: In order to keep his sidewinder snake of a cousin from inheriting, he has to honor his uncle’s will and marry within two weeks.  Life can’t get much worse, and then he falls for an eccentric, spitfire songwriter with a mysterious past and a passel of troublesome admirers.  Marrying Paris is about as smart as kissing a coyote, but that’s eactly what he intends to do–whether she likes it or not.

Together they could realize their dreams.  That’s if they don’t drive each other crazy first! 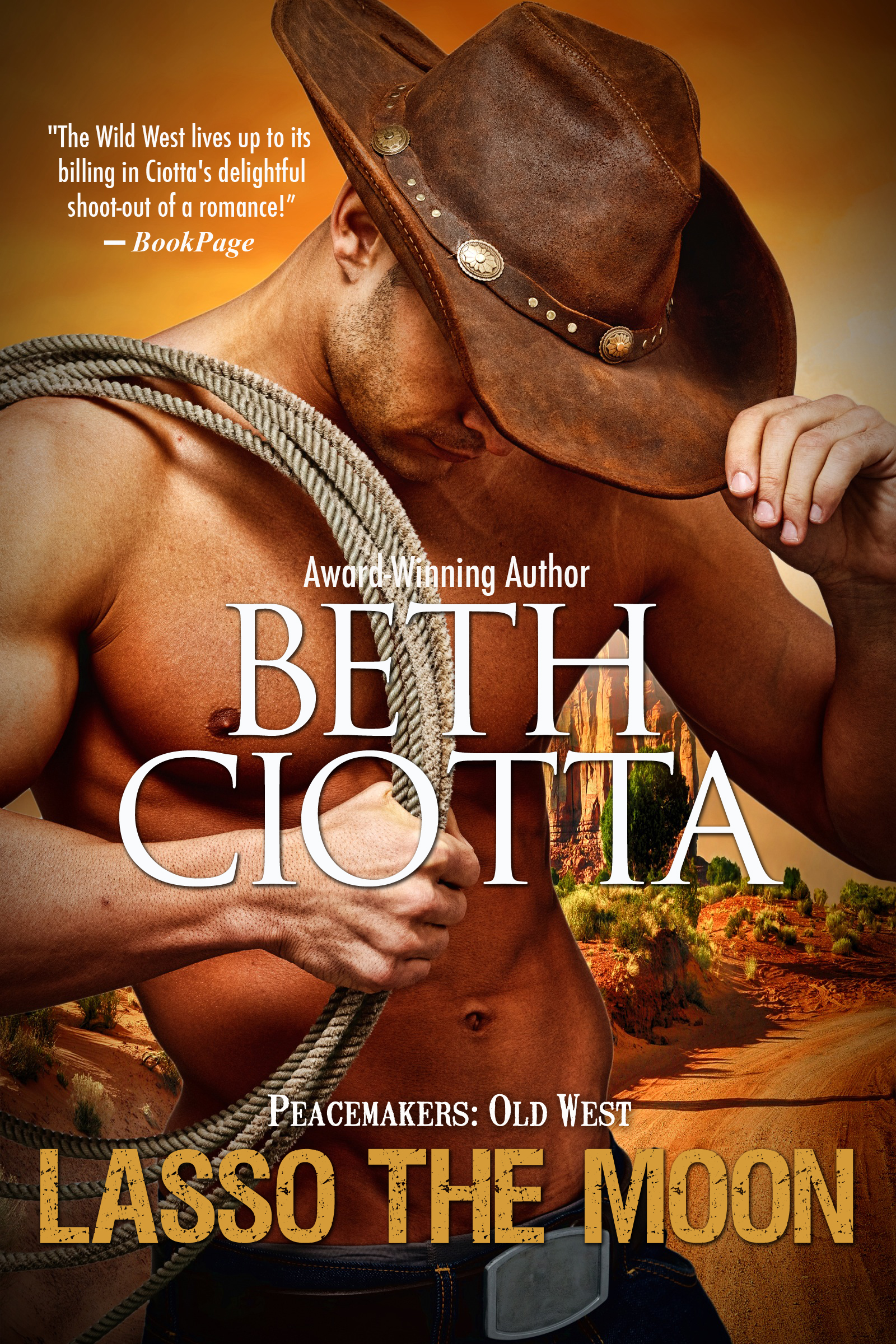 “Witty dialogue puts the story on a fast pace and will have you smiling if not laughing out loud. A great combination of romance, laughter, mystery and triumph.” — Five Stars! Affaire de Coeur

“As crafted by Ciotta, Paris is a spunky, plucky heroine that readers will root for.  Josh is the perfect hero for her, and the adventures–and misadventures–that they share as they find their promises and dreams make for a fun, fast read.”   — 4 stars, RT BOOKreviews

“The Wild West lives up to its billing in Beth Ciotta’s charming romantic comedy Lasso the Moon. This is a delightful shoot-out of a romance, a good ol’ fashioned tale of high-spirited fun.” — BookPage

“Ciotta uses her own musical-theater background to pen an adorable tale that will put a smile on your face and a warm feeling in your heart. All the elements that made old Saturday afternoon Western fun are here: dusty trails, ornery secondary characters, well-timed humor, a sly villain, a good gunfight or two, and a hero and heroine to root for all the way.” — Book List

A queer sense of doom nagged Josh as he neared the cell.  His out-of-sorts life was spinning toward the point of no return.  Of course, he wasn’t in the best frame of mind.  Mason’s death still dogged him.  Mason’s will still irked him.  And Paris had turned out to be more of a diversion than he’d bargained.

He unlocked the door and eased it open.  Stepping inside, he pushed his Stetson further onto the back of his head, stroking a day’s growth of whiskers while he took in the unsettling sight.

Paris looked like a little girl, curled up, sound asleep on the jailhouse cot.  Seeing her like this, all vulnerable like, no wonder Fedderman compared her to his shy and proper daughter.  Thing was, judging from her behavior thus far, Paris was anything but shy and proper.  Still and all, the old man was right.  It wasn’t safe for a woman to travel unescorted across the desert.  Especially when that woman had more sass than sense.

Kissing his peace and quiet goodbye, he crouched down and lightly touched her shoulder.  “Paris.”  She didn’t stir, so he gave her a little shake, frowning when she didn’t respond.  Concerned she might be ill, he pressed his hand to her cheek.  No fever.  The intensity of his relief annoyed him.

He started to pull back, but she nuzzled her face deeper into his cupped palm.  Dark strands of sawdust-sprinkled hair tickled her left cheek.  Her lips curved into a bedeviling smile.  Damn, she looked ornery even when she slept.  She murmured, “Josh,” and that queer lump welled up again in his throat.  He swallowed hard, wondering if he was catching cold.  Then he focused on the fact that he’d invaded this girl’s dreams.  He wasn’t sure whether to feel smug or worried.  Unable to help himself, he smoothed her tangled hair from her pretty face.  “Morning, kid.”

She shot up like a startled bobcat, smacking her head against the wall and knocking Josh on his backside.

Swearing under his breath, he righted himself then reached out to her to inspect the damage.  “You all right?”

“Yes.  No.”  She nudged away his hands, massaged the base of her skull.  “That smarted.”

“I’ll bet.”  He stood and stared down at her, deciding she was not only loony but accident prone.

She blinked up at him.  “What are you doing here?”

“I could ask you that question.”  He pointed to her bare feet.  “Where in the devil are your shoes?”

He plucked his hat from his head and jammed his fingers through his hair for the second time this aggravating morning.  “How does a body get dressed to go out and forget to put on her shoes?”  It boggled his mind, adding to the pain stabbing at his temples.  “Never mind.” Repositioning his hat, he got a whiff of stale beer.  He leaned closer and sniffed.  “Friendly tip, kid.  Lay off the booze.  You’re short on sense as is.”

She rose slowly, tilting her head up to meet his admonishing gaze.  “I’m not drunk, and I’m not stupid.  I knocked into a table of half-filled glasses.”

“Which wouldn’t have happened if you weren’t in the saloon in the first place.  You’re lucky Fingers didn’t shoot first and ask questions later.”

“That hot-headed, unprofessional oaf!  All I wanted was to play—”

“—the piano.  I know.”  Had she no regard for her safety?  “One of these days your reckless behavior is going to get you into serious trouble.”

She wiggled the bare fingers of her left hand.  “I don’t have a husband or a fiancé.”

He didn’t want to consider why that made him so all-fired glad.  “Your pa?”

She shifted her gaze toward the barred window.  “Papa’s dead.”

Josh winced at the hitch in her voice.  Once upon a time he had worshiped his own father.  But that was before the man had drunk himself to death.  Shoving the ancient hurt aside, he cupped her chin demanding her attention.  “Your brothers then?”

“You know my brothers?”

“I know they consider you an expert.  Or so you told Fingers last night.”  She’d floored them all with that racy tidbit though he’d quickly surmised she’d meant her abilities as a pianist.

“Oh.  Right.”  Looking almighty relieved, she knocked away his hand, and eyed the open door.  “Can I go now?”

Maybe Fedderman was onto something.  “Listen, kid, whatever you’re running from—”

She huffed an exasperated breath.  “Am I free to go?”

“Did they mistreat you in some way?”

Josh dug deep, clutching the last of his patience.  “What’s that supposed to mean?”

The muscles in his neck bunched.  Fury burned its way up from his toes to the tips of his ears.  She may as well have accused him of murder.  He closed the distance between them, backing her flush against the cell wall.  Bracing his hands against the stones on either side of her head, he caged her between his arms and glared.  “Come again?”

“Well, not outright,” she explained, her voice climbing an octave.  “More like by way of omission.”

“Why didn’t you tell me you’re a sheriff?”

She grinned ear to ear.  “Really?”

“Why does this make you happy?”

“It doesn’t.”  Her smile slipped.  “I mean, why would it?  I was just curious as to why you’d failed to mention it.  Your occupation, that is.  Not that it matters.”

He wanted to shake the living daylights out of her.  “Are you among the willows?”

“Glad to hear it.”  He leaned closer.  “I’d hate to have to escort you to Florence in handcuffs.”

Her eyes widened like a trapped animal’s.  “What are you talking about?  I don’t need an escort.”

“There are those who believe otherwise.”

“I can take care of myself.”

“Like hell.”  To prove it he kissed her.  He slanted his mouth over hers again and again.  Hot, hungry, calculated kisses.  He wanted to send her running.  Because she aggravated him.  Because she’d attacked his integrity.  Because she was naïve and fearless.  But mostly, because she made him burn.  He’d never experienced such a fast and fierce attraction.  It scared the hell out of him.  He needed a wife, and she was not wife material.  She was a pain in his neck.  Literally.

Unfortunately, his plan backfired.  She countered his assault by kissing him with a clumsy enthusiasm that stirred his blood, hiking his desire to a dangerous, irrational level.  If he didn’t stop now, he’d end up taking her against the jailhouse wall.  Next step, the altar.

Stunned, he held her at arm’s length like a stick of dynamite.  Surely she was just as dangerous once you lit her fuse.  Never in his life had he taken liberties with a stranger.  A young woman on the run, for Christ’s sake.  He’d kissed this one twice.  And this time he was sober.  What’s worse, she encouraged his disgraceful behavior.  “Stop doing that,” he said through clenched teeth.

Her glazed eyes cleared and sparked.  “You kissed me first!” That doesn’t mean you have to like it.”  The thought of her kissing another man with the same sweet abandon knotted his gut.  Not that he was jealous.  Hell, no.  Just concerned another man might take advantage of her virginal curiosity, exhibiting even less restraint than himself.

“Of all the . . . ”  She swung out and slapped his face with a force that rocked his head.