a note from beth…

JINXED (the 1st book in my Friends & Lovers trilogy) is an earlier work of my heart. I’m thrilled to have the unexpected opportunity to update the content as well as the cover design. (New cover on the right!) Whether you’re revisiting this fun and sexy cast of characters or meeting them for the first time, look for an exciting reissue of the entire trilogy fall/winter 2019!

Luck is a State of Mind…

Born on Friday the 13th, hapless socialite Afia St. John is convinced she is jinxed.  She’s lost two husbands, an inheritance, and can’t even keep a job serving pancakes.  Hard-boiled private investigator Jake Leeds needs money, bad enough that he accepts a secret payment to hire Afia as his assistant. Believing her only skill is shopping, both are shocked by her natural talent for investigating—not to mention their sizzling attraction to each other.

Will Jake be the good luck charm that puts Afia on a winning streak or, like everything else in her life, will he wind up jinxed? 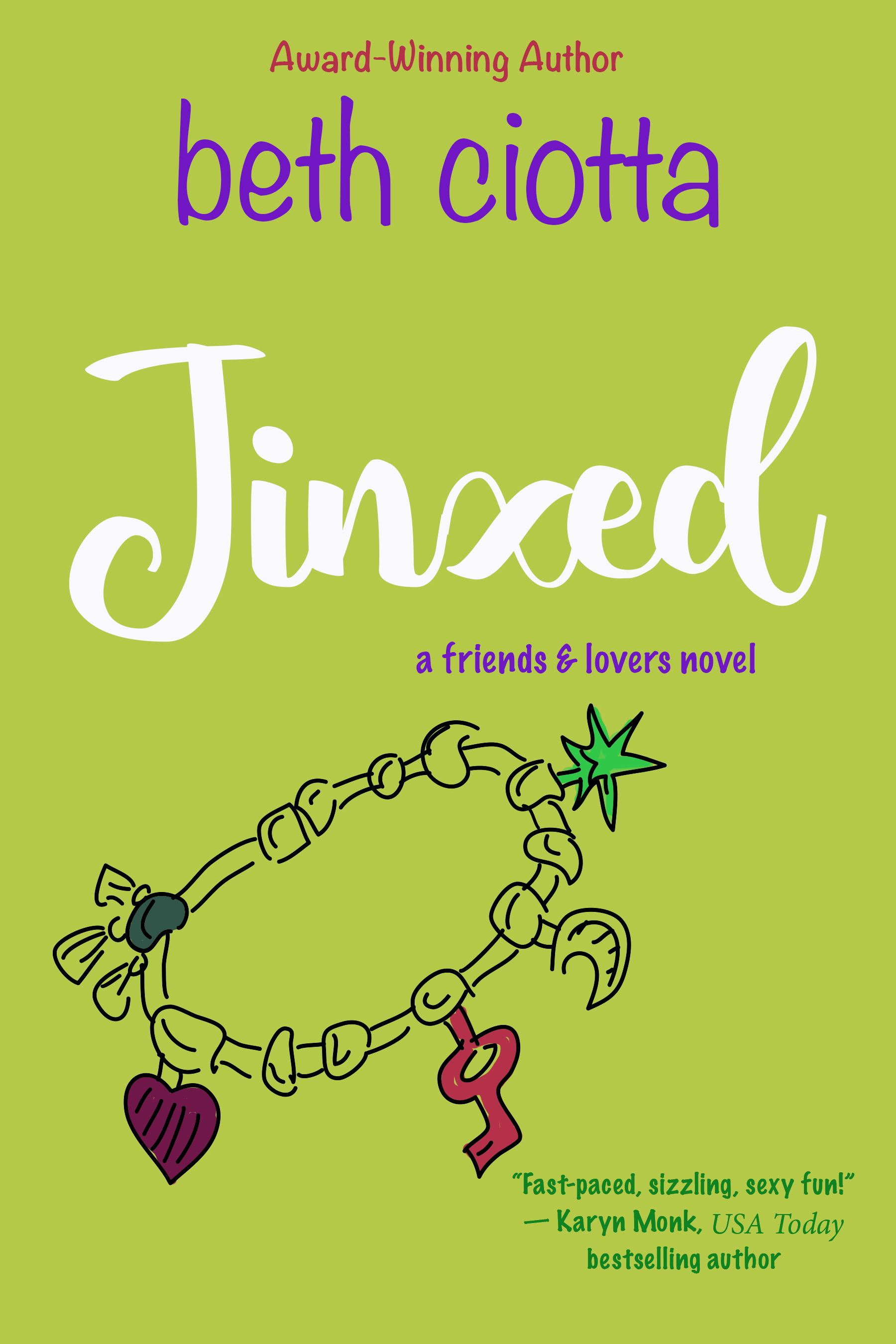 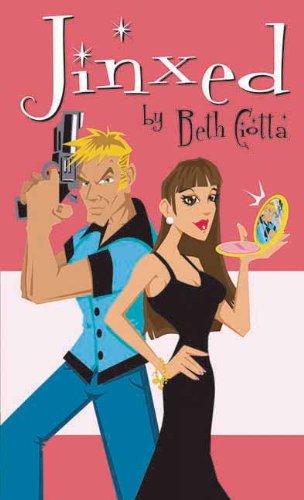 “Ciotta’s first solo release is a sexy – Jake is so hot! – and often hilarious story that is guaranteed to hold you to the last page . . . full colour is what comes to mind when I think of JINXED – and full of sexy fun is what you can expect when you read it.” — The Road to Romance

“JINXED is Ciotta’s first solo release and it’s a great one!  … a story that is filled with sex appeal and downright romance… I can easily see Jake and Afia being given another story to investigate and love their way through, and if the author ever decides to give it to them, I will be the first in line to read it!” —Romance Readers Connection

“Are you computer literate?”

“I know the basics.”

Afia fidgeted in her seat, uncomfortable with her prospective employer’s clipped tone. “I’m sure if you explained your system . . . ”

“You can answer the phone, right?”

“Call me Jake.” He opened his top right drawer. Closed it. “What about coffee?”

“No, thank you, Jake. I’m already over my limit this morning.”

His keen emerald gaze shifted from the drawer to her bouncing legs.

She willed them steady and offered a weak smile. “Caffeine gives me the jitters.” And so do you. She was accustomed to men falling all over her. She’d been blessed with good looks, exquisite taste, and old money. Qualities that appealed to 99% of the male population. Apparently, Jake Leeds was in the one-percent minority. He showed no signs of adoration. In fact, he’d seemed vaguely annoyed with her from the moment she’d walked into his unaesthetic reception area, though she couldn’t imagine why. She’d been on time. She’d dressed appropriately. A carnation pink Prada shift with coordinating sling backs. Professional, yet cheery. Still, he kept studying her with that disturbing, disapproving gaze.

I haven’t done anything wrong.

He’d probably read about her in the papers. Although she’d bet her Gucci sunglasses he skipped the gossip columns, he no doubt skimmed Region and Lifestyles. Maybe he’d read her name in one of her two wedding announcements. Or in one of the three obituaries. Or maybe he’d caught the article on Frank’s golfing accident. Sports section, front page. An eleven-month-old headline, but bizarre tales lingered in one’s memory.  No doubt Jake Leeds was wondering why on earth he should hire Atlantic County’s own Urban Legend.

Afia’s stomach twisted. She not only needed this job, she wanted this job. She couldn’t afford to hire a private investigator to track down Henry Glick. But if she worked for one . . . She resisted the urge to stroke her charm bracelet. Rudy had suggested creative visualization over a sentimental talisman. Since she was striving to better control her fate, she visualized herself sitting behind that hideous beige metal receptionist desk, utilizing the skills she’d learned from a cranky P.I. to locate a shifty thief.

Her cheeks warmed. “Oh.” She wasn’t sure, but she thought he cracked a hint of a smile. Or was it a smirk? Either way, at least it made the stony-faced Mr. Leeds more human. His boxer-build and dangerous aura superceded his boyishly handsome face. He was, in a word, intimidating. “I make excellent cappuccino.”

“What about plain old coffee?”

“I am?” His war-zone desktop suggested that he was desperate. Scattered files, phone books, and roadmaps. A mound of receipts. Stacks of CDs and abandoned coffee cups. How could he function effectively in such chaos?

He scooped up a small stack of manila folders. “You can start with these. Staple the data sheets into the folders and then file them alphabetically by last name.” That pesky smile or smirk or whatever made another brief appearance. “That’s my system.”

“You want me to start today? Right now?”

“Is that a problem?”

“Go ahead,” he said, still holding onto the folders.

She reached out to relieve him of the files, and their fingers brushed. An innocent touch that made her blush and set her heart fluttering. Unsettled, she jerked back, tipping over her brown vinyl chair. The folders slid out of her grasp. Papers scattered to the four corners.

Jake stood and rounded his desk.

She cringed at his mumbled curse, relatively certain she hadn’t heard “fudge.” Two seconds into her new job and she was already ticking off her employer. A new record.  At this rate, he’d fire her before day’s end.

No. She wouldn’t let that happen. She’d endured repeated humiliation these past three weeks thanks to heartless creditors and impatient employers. She may not have a talent for juggling numbers or a burgeoning food tray, but filing and making coffee? This she could handle.

This screamed of disaster. Jake eyed Afia St. John wondering who should get his head examined first. Him or Harmon? Jinxed? Unlucky? Inept? Talk about an understatement.

Jake straightened with a curse.

He grimaced at the tears shining in her wide brown eyes. Don’t you dare cry, lady. If she cried he’d have to comfort her. Which might entail holding her in his arms. Which would definitely entail risking what was left of his control. He was a private investigator, a master at concealing his emotions, an expert on practiced behavior, but he was also a man. She was a goddess. An accident-prone goddess, but nonetheless, a living, breathing angel on earth. He’d known she was pretty. He’d seen pictures. Last year alone she’d made the region section and the sports page. But, damn, in person she was captivating. A five-foot-two, doe-eyed, glossy-haired waif with impeccable taste in clothing. A twice-widowed beauty with questionable job skills and piss-poor business sense.

She kneeled, her form-fitting dress hiking up to reveal shapely thighs, her head level with his . . . Christ. He stooped down to hide an untimely erection. “I’ve changed my mind,” he said.

Hands full of ill-sorted data sheets, she looked him square in the eye.

Oomph. A punch in the gut. He had a very hard time reconciling this vulnerable woman with her media nickname. “Black Widow?” More like “Lost Puppy.”

She scrambled to her feet, affording him a brief, heart-tripping peek up her skirt.

Jake rose, damning Harmon and his misplaced trust. Well, not misplaced, but certainly inconvenient. A man would have to be dead not to be attracted to Afia St. John. Although two men who had been attracted to her were dead. Good thing he wasn’t superstitious, otherwise he’d have to show Ms. St. John the door, screw the money. Bolstering himself, he zeroed in on the trembling woman, prepared for waterworks. She surprised him with fire.

“You can’t dismiss me,” she said in rush. She glanced down at his appointment book and the blinking light on his message machine. “You’re overwhelmed. I can help.”

Jake eyed the scattered case files. “This is helping?”

“I have excellent people skills,” she continued. “I’m courteous and . . . and I’m a good listener. Your clients will love me.” She glanced around the room, brow creased as though she were in pain. “I’m also organized and have a flair for decorating.”

Hope sparked in luminous sable eyes. “What about the good with people part?”

“I’m fine with the good with people part.”

She smiled, a thankful smile that twisted his gut into a knot. Well, hell. Normally an unforgiving judge of character, he cursed his bleeding-heart reaction. Beautiful, pampered, born and married into money—she was a walking cliché. It was absurd to feel anything for her other than blatant lust.

“You were never fired.” He bent over to gather the rest of his files.

“You jumped to conclusions. We’ll have to work on that. I was merely about to suggest that we postpone your start time until you go home and change.”

He felt more than saw her tense. “What’s wrong with what I’m wearing?”

Nothing. “Everything.” He scanned her petite body—from strappy pointy-toed heels to belted waist to scooped neckline—while rising to place the papers on his desk. Classy. Sexy as hell. Skinny for his taste, but that face . . . huge soulful eyes, lush pink lips . . . Hell. “Unless otherwise notified,” he said, craving a cold shower, “dress to blend. That means no bright colors. No short skirts.” He pointed to her dainty pink shoes. “How the hell do you expect to run in three-inch heels?”

“You never know. And do something with your hair.”

She smoothed a delicate hand over her loose, sable locks looking as though he’d just insulted her to the quick. “Like what?”

Like shave it off. But imagining her bald didn’t diminish his desire. “Try a ponytail.”

“Nix the perfume.” The light, spicy scent would get a rise out of a Eunuch.