available in digital only

Some secrets are meant to be shared…

Doc Blue has never had it easy. Born a Freak, the offspring of a Vic—a native Victorian—and a Mod—a time traveler from the future—he’s lived on the fringes of society, hiding his true identity and preternatural healing abilities from even his closest friends. His brief support of the Freak rebellion has only left him with even more problems, losing him both his job and one of his greatest allies, the Sky Cowboy, Tucker Gentry. So when Tuck’s kid sister, Lily, ends up blinded in an air skirmish on her way from America to England, Doc jumps at the opportunity to be the one to rescue her and use his powers to mend her wounds.

Curing Lily proves harder than anticipated, and Doc realizes that to restore her sight he will have to spill his biggest secret and embrace his Freak nature like never before. But, with Lily’s help, Doc may be able to reach the full potential of his abilities, heal Lily’s broken heart, and learn, finally, how to open his.

Read on for an Excerpt 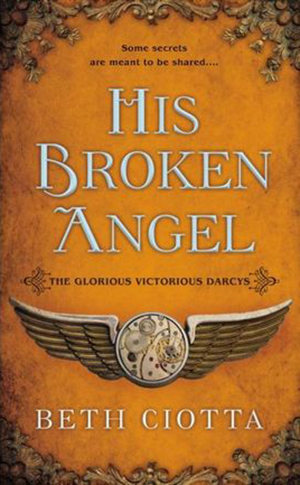 “A short read that holds true to the action, adventure and romance of the the series.” — Amazon reader review

“It’s riveting and kept me reading to the end. I wanted more. — Amazon reader review

“I’m sorry I got you in this fix,” Lily said, fiercely conscious of their intimate and highly inappropriate position. Arms and legs entangled. Her backside pressed against his groin.

“I’m here on account of my own actions, angel. I promise I’ll get us both out.” He shifted and squeezed her waist, pulling her even closer. “Jasper just ran off. Guess he’s heading for the Crusader. Don’t know what that dig looks like, but she must be flashy or big. P.J. said she’d attract attention.”

“Let’s put it this way. It’s called the Bullet.”

“With wings and a tail and some sort of rocket booster. P.J.’s firing up now.”

Lily heard the rumble clean through the shield. The cramped dirigible vibrated and shimmied and Lily braced for takeoff. “Are you scared, King?”

“You forget I’ve been riding with your brother for the past few years. If we weren’t chasing and apprehending outlaws, we were clashing with sky pirates and ALE. This is nothing. Although P.J’s flying ain’t for the fainthearted.”

“I’m not fainthearted.” Lily licked her lips. “Not usually.”

“I believe you, but flying blind is discombobulating. Focus on my voice,” he said close to her ear as the vessel lurched forward. “I’ll talk you through it.”

For a minute she was breathless, speechless. Her mind and body reeled with the forceful launch and the sudden unexpected speed as they shot through the air. Just as he’d promised, Doc described everything. The three ships that constituted skytown breaking apart and heading in separate directions , several other smaller digs shooting off every which way . . .

“Flashy and big?” she asked, holding tight to Doc’s hands.

“Beauty of a zeppelin wrapped in an intricate iron grill. Topside propeller and rear rocket thrusters. Gondola’s loaded with cannons and the zepp’s fitted to carry small fighter digs like this one.”

“How . . . how can you be sure it’s the Crusader?” Lily asked as the Bullet lurched right.

“The big S welded into the intricate grill work.” Doc sighed. “Caped Crusader. Man of Steel. Superman. A twentieth-century superhero. Pa used to liken Jasper to the fictional icon. Thing is Superman used his powers for the greater good.”

“For Jasper,” Lily said as she struggled with a dizzy spell, “emancipating Freaks is the greater good.”

Doc kissed the back of her head and the dizziness intensified. Only it wasn’t from the topsy-turvy ride. Cannon fire exploded in the distance and Lily burst with a fierce need to live in the moment. This moment. “I’ve never been kissed.”

“If this ends badly, I want something good to remember when I meet my maker.”

“Don’t talk nonsense, angel. P.J.’ll get us out of here. If nothing else, her pride demands it.”

Ignoring the ache in her ribs and the pain in her leg, Lily swiveled round best she could. “Kiss me proper-like, King.”

She could feel the warmth of his breath. His mouth, so close. His body tensed as she leaned in, but she didn’t pull back. She waited . . . and when the Bullet shook with the blast of return fire, she took what she wanted. A kiss. Though her mouth glanced off Doc’s, she tasted a hint of peppermint and slice of heaven. Bliss.

He groaned then, cradled her face, and pressed his lips to hers—firm and true. He kissed her proper-like. The kind of kiss she’d read about in dime novels. The kind she’d seen stolen between lovers in the park. Heat radiated through her body, her skin tingled, and her blood burned. He teased the seam of her mouth with his tongue, and Lily’s lungs near about burst through her ribs.

Inspired by their precarious circumstance and her uncertain future, she parted her lips and welcomed Doc’s tongue. The awfulness of the world faded away as the compassionate healer gifted her with sizzling passion.

The Bullet bucked then arced, and Lily’s heart followed.