Call her a fool, but chef-in-training Chloe Madison wants to have her cake and eat it too.  So when her boyfriend dumps her for some French tart, she decides to start over from scratch—with a new life and a job in Sugar Creek, Vermont.  What could be sweeter than cooking for an eccentric lady who’s crazy for desserts?  What could be more tempting than joining a club called the Cupcake Lovers?  Just one thing: local business hunk Devlin Monroe…

AND HE’S THE ICING ON THE CUPCAKE

Although he’s the grandson of Chloe’s fun-loving boss, Devlin Monroe is all work and no play. Micro-managing the family business, he doesn’t have time to indulge in life’s sweetest pleasures—until he meets Chloe.  How can he resist such a vibrant, beautiful woman who brings so much passion to the table? But when old grudges and secrets threaten to destroy the Cupcake Lovers, Devlin must decide if his feelings for Chloe are a recipe for disaster—or a sinfully delicious ever-after… 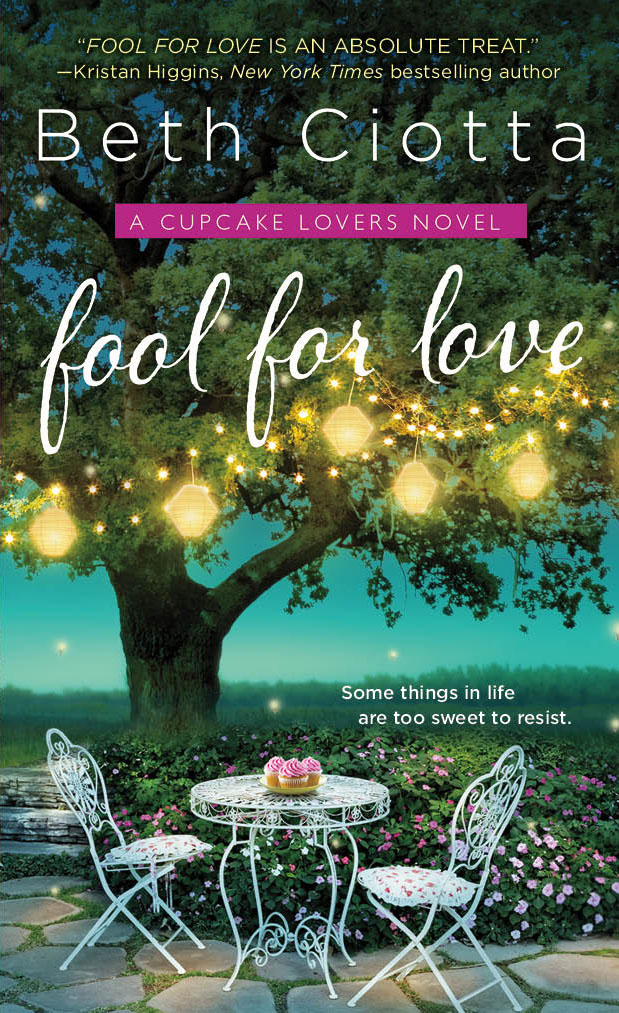 “Ciotta’s wit adds spark to this tale of extended-family joys and sorrows, smalltown living, and complicated characters with secrets that will keep readers waiting eagerly for the next Monroe family story.” – Publisher’s Weekly

“Ciotta writes with style, wit and heart. Can’t wait for the next one!” –New York Times bestselling author, Susan Andersen

“Ciotta is a master of the fun-to-read romance, and this outing is no exception. She crafts a lovely Vermont town, filled with a charming extended family and lead characters who are genuinely good people with the best intentions.” – Romantic Times BOOKreviews

“How many years do you think I’d get for death by Cuisin­ art?”

“With a hand mixer?”

“Or easy. How exactly would that work?”

Chloe didn’t know—exactly. She wasn’t thinking ratio­nally. Her brain was choked with visions of Ryan licking vanilla-bean buttercream frosting from her beaters—frosting she’d prepared for a celebratory cake—right before announc­ing he was leaving her for a Parisian “tart.” (Chloe’s descrip­tion of the other woman, not his.)

Heart full of equal parts grief and fury, Chloe squeezed back tears as she continued her long-distance tirade with her closest and oldest friend. “Maybe you’re right,” she said into her smartphone. “Maybe I should skewer his traitorous heart with my meat fork. Or pulverize him with my tenderizer.”

“That’s just grisly. And totally out of character. You’re a pacifist, hon. Zero tolerance for gore. You threw up when we accidently ran over that squirrel on Route Twenty-two. Re­member?”

Senior year of high school. Driving home from a rehearsal for West Side Story. Monica had swerved, but not enough. Chloe had screamed when she’d felt the thud, then, looking out the rearview window and seeing the furry roadkill, had puked all over the backseat of Monica’s 1992 Camaro.

“Sort of,” she mumbled, letting out an aggrieved sigh. Monica was right. Violence and gore wouldn’t do. Just think­ing about that squashed squirrel turned her stomach and soured her killer instincts. Once she was depleted of rage, Chloe’s knees buckled. She slumped onto the love seat she and Ryan used to cuddle on, misery pouring over her soul, slow and thick like the homemade maple syrup Monica had shipped from Vermont.

Two years. Chloe had invested two years of her life in this relationship—her longest serious liaison ever. She’d had a severe falling-out with her dad when she’d moved in with Ryan, and she’d lost touch with a contingent of her NYC friends when she’d given up partying for domestic bliss. She hadn’t expected a conventional union, what with Ryan fre­quently traveling oversees for his job, but she hadn’t expected this. She hadn’t suspected an affair, hadn’t felt Ryan’s affec­tions straying. She’d thought they were a solid couple, des­tined for marriage. She felt like the biggest freaking idiot on the planet.

“Listen, Chloe. I know you’re crushed. The bastard cheated on you. That sucks. And he’s leaving you for her. Sucks worse. But . . .”

Monica blew out a breath. “Okay. Here comes some tough love, sweetie. You had a comfortable relationship, lived a comfortable life, but did you seriously want to spend the rest of your nights with a guy who couldn’t find your G-spot?”

Chloe flushed. “I had orgasms.”

“With the shower massager. Doesn’t count.”

“I shouldn’t have shared that with you.”

“Why not? I told you about the time I got off sitting on top of the crazed washing machine.”

“Are you trying to make me feel better? Because, news flash, you’re not.”

“I’m trying to tell you Ryan Levine isn’t worth twenty-five to life in the state penitentiary.”

“Now I just want to curl up and die.”

Chloe burst into tears and poured out her heart. Maybe Ryan wasn’t worth a stretch in the clink, but he was sure wor­thy of a good cry. “He ruined the happiest day of my life, Monica. After all these years, all the botched courses and careers, I finally followed through, finally excelled at one of my passions. After four hundred and forty hours of in-class training and a two-hundred- and- ten-hour externship, I not only earned a diploma from the Culinary Arts Institute; I graduated with honors.”

“What? You’re kidding! I mean, that’s fantastic! Why didn’t you tell me?”

“I just found out today. About the honors part, anyway. The happiest day of my life—ruined! The affair’s been go­ing on for months. He could’ve waited a day or two to dump me. Any day other than my proudest.”

“Or,” Monica growled, sounding like a provoked mother bear, “he could’ve broken off with you weeks ago, when the fling started.”

“He said he didn’t want to distract me from my studies.”

“He’s coming back at the end of the month to pack up his things. He’s actually transferring to the company’s resort in France so he can live with her. Said our apartment’s paid up for the next three months. That gives me three months to find a roommate or to find a place I can afford on my own. Both prospects are daunting. Not to mention I’ll be job hunt­ing at the same time.”

“Maybe you could ask your dad—”

“Right. Dumb suggestion. Okay, then. Come stay with me.”

Chloe blinked. “You live in Vermont.”

“So what? Put your things in storage and fly up for an extended visit. It doesn’t have to be forever. Just time enough to heal. To catch your breath and plan for your future. Who knows? Maybe you’ll fall in love with Sugar Creek like I did and want to stay.”

Chloe glanced around the living room and into the kitchen, her gaze drifting toward the bedroom. Every square inch of this apartment reminded her of Ryan and the life they’d shared. She couldn’t imagine staying here for the next three months. What’s more, she didn’t want to.

“I don’t feel right about imposing on you and Leo. You’re trying to have a baby. I . . . I wouldn’t feel comfortable.” Ac­cording to her friend, she and her husband of three years were doing it like bunnies every chance they got. Last week when he’d come home for lunch, she’d greeted him at the door naked.

“Potential for awkward moments,” Monica said with a smile in her voice. “True.”

“Plus, what would I do with my time? Sugar Creek is even smaller than the town we grew up in. I’ve been a city girl for fourteen years. I need culture. Activities and distractions.” Especially now. The last thing she needed was empty hours enabling her to wallow in the breakup.

“We have activities and distractions in Sugar Creek,” Monica said. “Just different than what you’re used to. Hey, I know. Daisy Monroe is looking for a cook and companion.”

“The whole town? What is she, famous or something?”

“You could say that. She lives alone in a beautiful old colo­nial home. I bet if I asked, I could get her to include free board.”

“It’s perfect! Time away. Time with me. Plus you get to cook. Let’s put that diploma to use, honey!”

She hugged Ryan’s favorite toss pillow to her chest, breathed in his scent. Her aching heart pounded with re­newed fury. What the hell. “Yes.”

“Fantastic! I’ll line everything up. You pack. Oh! Speak­ing of activities, you can join Cupcake Lovers. Hit us with some of those fancy recipes you learned in culinary school.”

Monica had mentioned the local club in her e-mails. A small group that met once a week to swap recipes and ideas on how to make a difference in the world via cupcakes— chocolate, red velvet, banana walnut . . .

Chloe envisioned the devil’s food cake she’d chucked in the garbage less than an hour ago. Thought about the way Ryan had sampled the frosting, the groan of delight just be­fore the weary sigh. Remembered the way he’d raved about her cooking over the last few months, especially the dishes she’d created during her Contemporary Desserts course.

Equating confectionary with heartache, she wondered if she’d ever be able to mix up another dessert without feeling depressed or homicidal. “I’m swearing off sweets,” Chloe said with a sniff. “Forever.”