They gamble their lives with reckless abandon, but are they brave enough to bet on love?

Famous for bending the law to get his man, former Wells Fargo detective, Rome Garrett signs on with the Peacemaker Alliance, a covert government agency intent on taming the west. Unfortunately, his first assignment involves teaming up with the only woman who ever broke his heart in order to entrap a cold-blooded killer. Bringing down Bulls-eye Brady would restore Rome’s tarnished career. As a personal bonus he vows to show his old flame how it feels to love and lose, vanquishing the beautiful hellcat from his dreams once and for all.

Retired cardsharp, Kat Simmons, has been in hiding for six years. Now she’s being asked to risk her hard won obscurity by baiting the very man she fears. Not only that, the plan involves spending intimate time with Rome, the only man she ever truly loved. Readopting her flamboyant persona, Kat joins Rome on a whirlwind poker tournament tour, gaining notoriety as they clean up at the tables. When word gets out that Kat Simmons is back on the circuit, with any luck, Bulls-eye Brady will show up to reclaim the woman who “got away”. Meanwhile Kat and Rome grapple with rekindled passion, past betrayals, and a secret that could prove their doom. 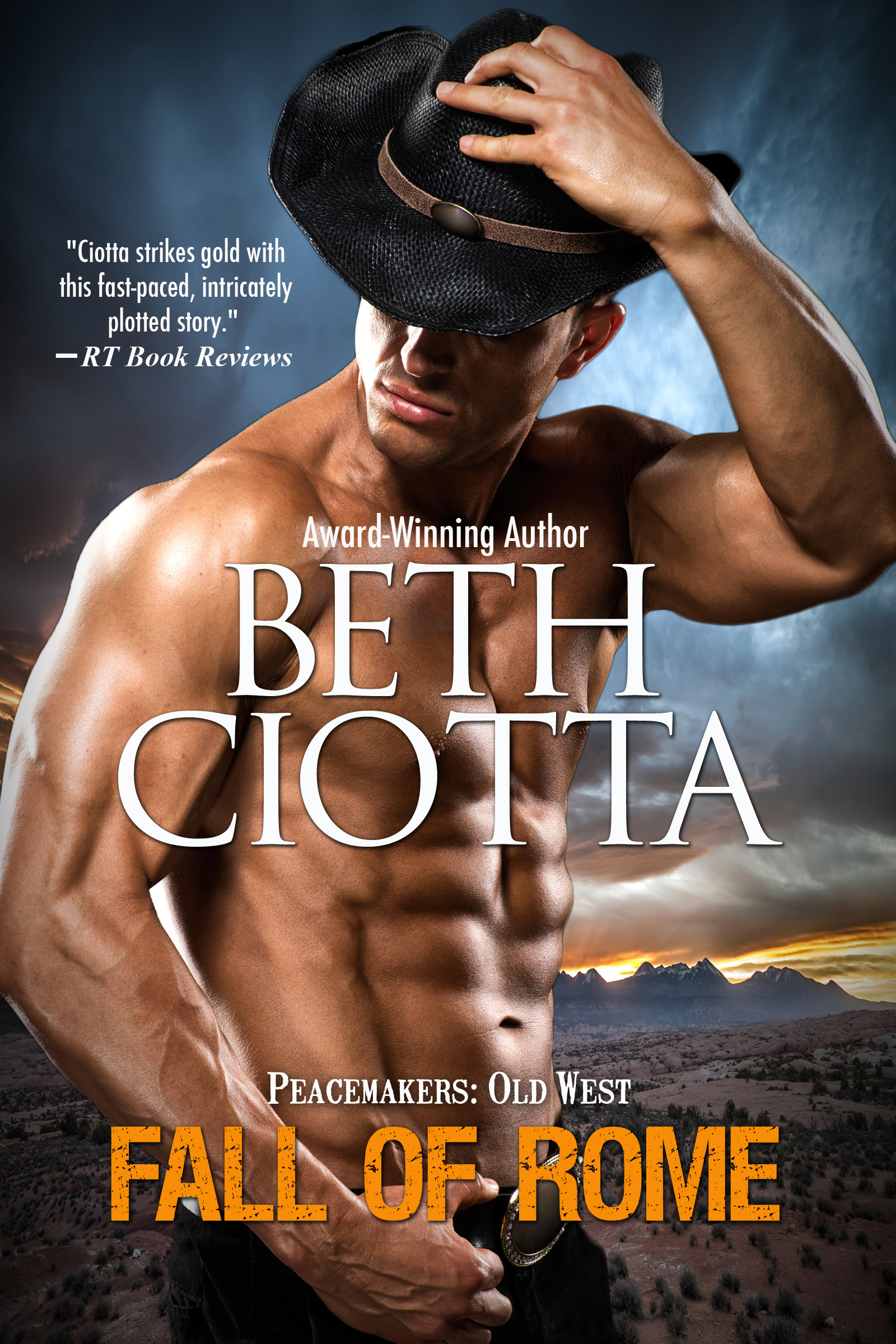 “Ciotta strikes gold with this fast-paced western. The characters that readers loved are back in this intricately plotted story which features a hero and heroine who fight like cats and dogs!” — 4 stars, RT BOOKreviews

“Ciotta brings her characters to life with perfect pitch dialogue and emotional realism while keeping the action fast-paced and the humor flowing!”–5 spurs!, Love Western Romances

“The story is twisty, fun, and passionate, but it has an even greater sense of suspense because of the extra-evil wrong-doers, and the innocent people who are in their way. Fun, fun read, highly recommend the series!” –Amazon reader review

DISGRACED WELLS FARGO DETECTIVE—Rome Garrett—S.O.L.—stared up at the crumbling ceiling of the Gila Gulch jailhouse, thinking this was as bad as it gets.  Listening to a sibling create his own epitaph.  Yes, sir.  After a month of drinking and carousing, he’d hit rock bottom.  Shit outta luck.  “You’re not going to swing.”

“We’re both in the hoosegow.”

“Me for pluggin’ Wild-Man Dan.  You for threatening a law officer.”

Boston swung his legs over the creaking cot and relaxed against the adobe wall.  “This Marshal Burke’s a weasel.”

“No call for arrest.  You shot in self-defense.”

But Rome wasn’t altogether innocent.  He massaged his pounding temples, contemplating the summer indiscretion that led to this evening’s disaster.  Admittedly, bedding a state senator’s wife hadn’t been his most shining moment, but did it deserve his being fired as a detective for Wells, Fargo & Company?  Did it deserve the gut-dropping plummet from dime-novel hero to disreputable rake?

Guilty of adultery in the public’s eye when all he’d been was a fool.  A sucker for any woman who claimed she needed saving.  He could deny it to the world, but not to himself or the rest of the Garrett brood.  The fairer sex was his Achilles’ heel.  One had even managed to break his heart.  But that had been a long time ago and he didn’t think about her anymore.

Except on their anniversaries.

The first day they met.  The first night they made love.  The first time she lost track of the hour and the first time he took her for granted.  Some sort of curse, the way he remembered the dates and details.  Though today held no special significance, his recent game of distraction was her game of profession.

If he closed his eyes he could see Katrina Simmons sitting at the tables, dressed in a colorful bustled gown with a scandalously low neckline.  Waist-length chestnut curls twisted into a sassy updo.  Pert nose.  Full lips.  Soulful brown eyes fixed on the cards just dealt.  Expression serene as she contemplated her bet.

Eyes wide open, he got a big dose of little brother.

Out of boredom Boston had recently cut his dark hair short and shaved off his moustache.  Made him look younger, but no less dangerous.  The youngest Garrett had always had a rough and tough edge.  “Regrets?” he asked.

“Plenty,” Rome said, focusing back on the present.  “But shooting Wild-Man’s not one of them.”

They’d walked into the Tarantula Saloon just as the locally feared rowdy backhanded a wrung-out dove.  Her cut lip made Rome see red.  He and his brother had only been in the boomtown two days—passing through on their tour of debauchery—but they’d heard a boodle of stories and complaints about a trigger-happy cowboy with a mean streak.  Rome had intervened, knowing Wild-Man would strike back.  Given his reputation, he wasn’t surprised when he pulled his iron instead of throwing a punch.  Probably thought he’d make a name for himself, gunning down one of the famous Garrett brothers.  Except he’d underestimated Rome’s lightning speed.  Even if Wild-Man was a sure shot, a slow draw was a quick way to join the angels.

“Two hours ago we did what we’ve done for years,” Boston said.  “Faced down a low-down ruffian.  Only this time we landed in a two-bit jail instead of a ten-cent novel.  This time, instead of looking up to us, people looked away.”

The observation chafed.  Like he needed a reminder of how far they’d fallen.  He wished Boston would shut the hell up, but instead of biting his head off, he stated logic.  “Figure they wanted to distance themselves should Newt Gaffey come riding in retaliation.”  According to gossip, Gaffey was a big bug rancher and Wild-Man was his hired gun.  “You heard the murmurs.  Gaffey ain’t gonna like this.”

“Seeing Gaffey supposedly pays Marshal Burke to look the other way, we’re dead as a can of corned beef sitting in his jail.”  Boston rattled off another wry epitaph.

“Corrupt officials,” Boston said with disgust.  “Dangerous as standing bare-assed in a nest of rattlers.”

Rome knew he was stewing on how Senator Smith had greased palms to exact revenge.  The vengeful bastard had twisted the facts to ensure he and his wife came out of the scandal unscathed while Rome got skewered.  He supposed he should count himself lucky that the senator hadn’t paid someone to shoot off his offending member.  Still and all, the powerful man had hurt Rome plenty without employing violence.  One way or another, all of the Garretts were paying for his sins.

When Wells Fargo cut Rome loose, his brother gave the company an earful, forfeiting his own job.  Principle of the thing, he’d said.

Integrity, Rome thought, suffering another twinge of regret.  For a month running, he’d been mourning the loss of his high-profile job and stellar reputation.  Shouldering a wagonload of guilt because he’d taken his little brother down with him.  He’d wallowed in whiskey and cards, hoping to numb anger and regret.  Now a man was dead, and Rome sat on the wrong side of the bars for the first time in his life.  He’d made a bad situation worse.

Mucker, he could hear Kat taunt.  Gambler talk for someone who throws away his hand.  Except he’d thrown away his purpose.

Wild-Man wasn’t the only miscreant in these parts.  The territory was littered with bandits, rustlers, and cold-blooded killers.  But instead of wrangling outlaws, he was locked in the hoosegow.

Guilt intensified, bearing down on his shoulders and soul.  If he was destined to dance with the angels, he’d swing alone.  Necktie party for one.  Boston would not be a part of it, and he would do the only thing he knew to separate his loyal brother from his side.  He could at least do something right.

He sat up and set his brother square in the confines of the stifling moonlit cell.  “We won’t be shaking hands with Saint Peter, because we did not kill Wild-Man Dan.  Sure as the sunrise, we did not have an affair with a married woman.  I specifically recollect being alone in bed with the lovely, but treacherous Mrs. Smith.  We didn’t piss off her husband.  We weren’t scandalized in the newspapers.  There is no we in the recent series of tainted misadventures, Boston.”  He took a deep breath and delivered the final blow.  “Do me a favor and butt the hell out.  Get your own goddamned life.”

His brother’s unspoken anger hit him like an invisible bullet, smacking the air from his lungs.  They’d fought plenty in the past, but neither had ever been intentionally cruel.  Rome rolled back his shoulders.  “Just saying—”

“Marshal Burke wants a word with you, Garrett.”  Kerosene lantern in one hand, key in the other, the coyote-faced deputy unlocked the door and motioned to Boston.

Rome slouched against the wall.  His brother didn’t spare him a second look as he jerked on his Stetson and exited the cell.  He was pissed alright.

The men disappeared into the front office, a bit of a room, sparsely furnished and overburdened with documents and dust.  Rome listened but all he heard was muffled garble.  No shouting.  No shooting.  A good sign.  Maybe.

A minute later, Boston returned, clasping the buckle of his holster.  “Burke says I’m free to go, so long as I leave town.”

The marshal hovered nearby, thumbs tucked in his sagging waistband.  He glared at his prisoner while tapping stubby fingertips against his revolver.  Coyote-Face struck a similar pose.

Rome rolled his eyes skyward then back to his brother.  “You going?”

He dragged his fingers through his hair, struggling with a response.  Alienating someone he cared about wasn’t new, but it was the first time he’d driven a wedge between himself and one of his four siblings.  Even though he was doing it for the right reason, it felt wrong.  The urge to make peace was strong.

Out of habit, he dipped his hand in his pocket and palmed his lucky coin.  Which made him think of gambling.  And poker.  And Kat.

When the stakes are high, hold strong, steady.  It had almost been six years.  When the hell was he going to forget that heartbreaker’s voice?  Focus, she said.

He rolled the half-eagle coin over his knuckles, pondering his bad luck of late, hoping Boston would see the wisdom in this heated split when he cooled.  “Where you off to?”

“To get my own goddamned life.”