a note from beth…

CHARMED (the 2nd book in my Friends & Lovers trilogy) is an earlier work of my heart. I’m thrilled to have the unexpected opportunity to update the content as well as the cover design.  (New cover on the right!) Whether you’re revisiting this fun and sexy cast of characters or meeting them for the first time, look for an exciting reissue of the entire trilogy spring 2022!

Beloved storyteller, Lulu Ross champions non-violence.  Just her luck, she’s tiara over glass slippers for a man who carries a gun. Professional bodyguard Colin Murphy is s-e-x-y.  Too bad he’s delusional.  Who would want to hurt Princess Charming—a low-profile, goody-two-shoes who performs as a storybook character at children’s birthday parties?  Surely the sexy gifts from a secret admirer are meant for her sister, a bombshell wannabe action-star.  Or are they?

Murphy is determined to protect Lulu whether she likes it or not.  Perpetually cheerful and absurdly trusting, the locally famous kiddy-heroine refuses to believe she’s in danger.  Tipped off by the FBI, Murphy knows otherwise, but convincing Lulu that she’s the fantasy target of a mobster’s fixation is like trying to hang shades on the sun.  Contending with a woman who favors bubblegum lip gloss and a pink poodle purse becomes an exercise in fascination and frustration for the world-weary protection specialist; almost as frustrating as resisting her whimsical charm. 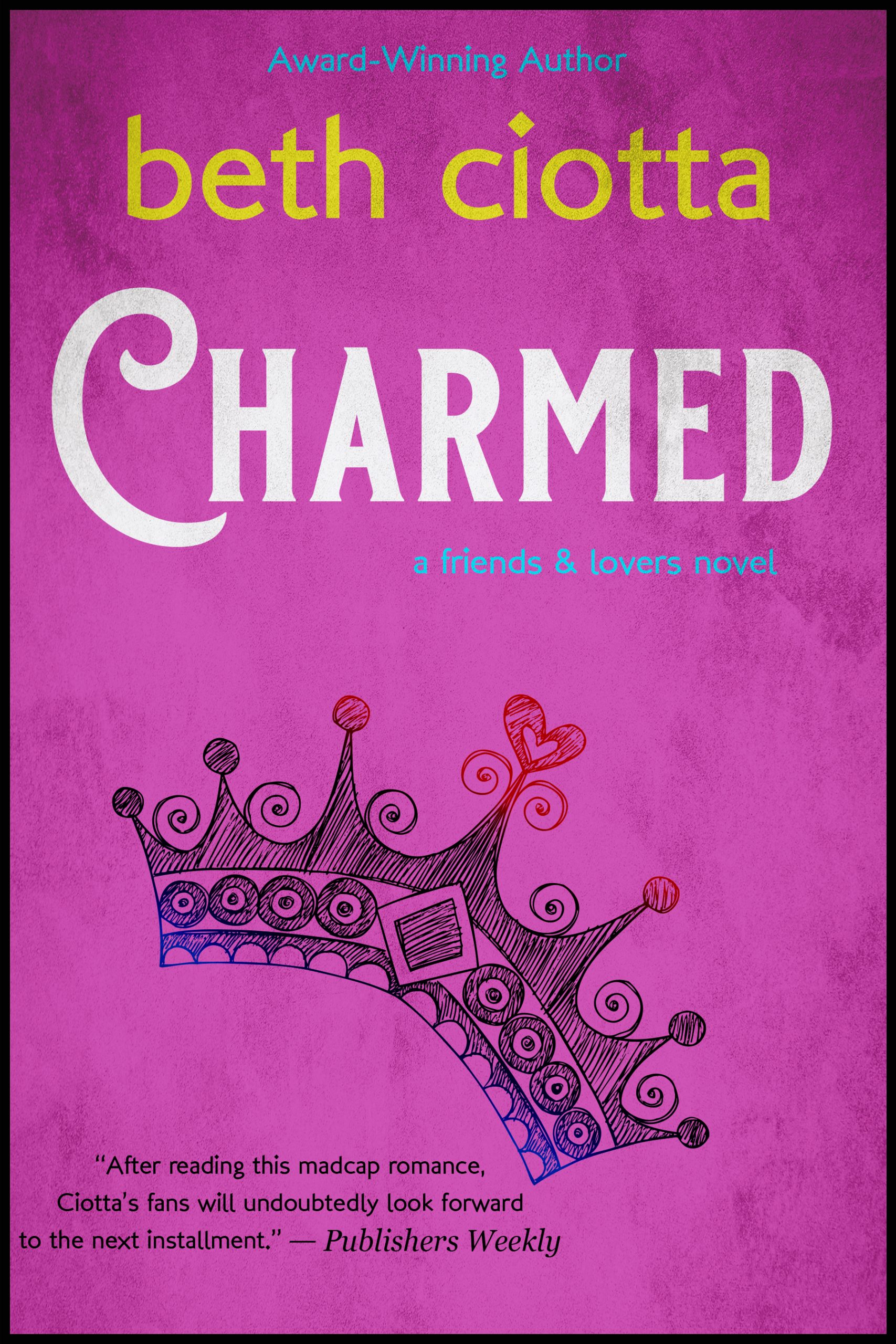 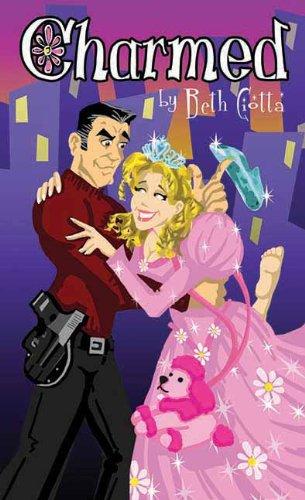 “An enchanting contemporary romance  … after reading this madcap romance, Ciotta’s fans will undoubtedly look forward to the next installment.” — Publishers Weekly

“With a heroine who is whimsical and kindhearted–though a bit too trusting–Charmed gives readers a full quotient of fun and sexy excitement.  Ciotta breathes real life into both her primary and secondary characters, making their struggles memorable.”  — 4-stars! RT BOOKreviews

“Charmed is a delightful story that is not only well-written, but the characters are vastly appealing as well. The story is tender and makes one hope that there are people out in the world who have such open and giving hearts. ” —A Romance Review

Even through his sunglasses, her smile was as bright as her neon pink lipstick.  Her dimpled cheeks shimmered.  Her brown eyes sparkled.  Her pixie face, decorated with artfully applied glitter and rhinestones, radiated pure joy and whimsy.  A crystal tiara winked at him through an upswept mass of wild, golden curls.  She wore a pale pink, floor-length gown—corseted bodice, the skirt a voluminous mass of stiff crinoline.  A gown befitting a Princess.  A fairytale version anyway.

“Hello,” Murphy said, hoping to hell she didn’t expect him to add Your Highness.

“I’ll be with you in a minute.”  She waved him inside the foyer and then turned and limped to the far side of what he assumed to be the living room.  The only hints—a couch and a nineteen-inch television.

He moved into the obscenely cluttered room, sliding his sunglasses to the top of his head for a clearer look.  Scattered stuffed animals.  Piles of books, videos and dog-eared magazines.  A Hula Hoop.  Pink-wheeled roller skates and a Twister game.  Walls of theater posters and cartoon art.  Broadway meets Nickelodeon.    To top things off, the place reeked of lemons and bubble gum.  Could a man O.D. on sunshine and lollipops?

He focused on the princess who was searching for something.  Considering the disorganized state of the room, she could be looking forever.

“Where is it?” she mumbled to the underside of a chair, its style and color indistinguishable as it was heaped with bolts of multi-colored, multi-textured fabrics.  All of them accentuated with glitter or sequins or some sort of metallic trim.

He sidestepped an overflowing sewing basket.  “Can I help?”

She straightened, red-faced and winded, her tiara askew.  “That would be great.”  Lips pursed, her gaze darted from one pile to another.

She’d yet to focus on Murphy.  Yet to ask him who he was or what he was doing here.  He could be a murderer or a rapist and yet she’d invited him in without hesitation.  No peep hole. No chain lock.  No “Who’s there?”  Just opened the door and invited him in.  If Bogie was right, if she was in danger, she was oblivious.  For the moment, he allowed her the fantasy.  “What are we looking for?”

“Well, it’s not really glass.  More like acrylic or plastic.  Whatever, it’s see-through.”  She hiked the hem of her gown.  “Pretty, huh?”

Pretty sexy.  Murphy admired her naked foot through the transparent pump.  She stood lopsided, one shoe on, one shoe lost, her left heel elevated a good three inches above her right. Her toenails painted a frosty shade of pink.  Cotton candy came to mind.  “Where’s your bedroom?”

She pointed to the staircase.  “Second floor, third door on the right.  But I already looked in there,” she shouted after him in her little girl voice.

He did a visual sweep of the adjoining rooms, ascertained she was safe, and then jogged upstairs.  He was back a minute later, glass slipper in hand.  Navigating her bedroom had been amusing.  He’d been particularly intrigued by her queen-sized bed.  Or rather the rainbow assortment of underwear piled next to a colorful collection of teddy bears.

Tearing his mind away from her lingerie, he focused on the enigmatic princess.  Stretched flat out on the floor, she groped under the sofa for her missing shoe.  The hoop beneath her crinoline bowed up, allowing him full view of her backside.  Unfortunately, for him, she was wearing knee-length, ruffled bloomers.

She whipped her head around.  Though flushed, she looked exactly as she had when she’d greeted him at the door.  Adorable.  “You found it!”  She bounced to her feet and hobbled toward him. “Where was it?”

She nabbed the shoe and slipped it on.  “I could have sworn I looked there.  Oh, well.” She threw up her hands and breezed by.

Murphy followed her through a compromised dining room (sewing machine, dress dummy, spools of ribbon and lace) to an immaculate kitchen.  Spotless stovetop.  Untapped spice rack.  A glass pantry stocked with cans of soup and jars of store-bought sauces.  The ladies’ creativity, it would seem, did not extend to cooking.

“I can’t thank you enough.  Now I won’t have to drive like a maniac to get to my gig on time.  If Farrah’s party hadn’t gone overtime I wouldn’t be in this fix.  Not that I’m complaining. My fault.  I shouldn’t have booked a double.”  She opened the refrigerator, pulled out a ‘Lara Croft – Tomb Raider thermos, and handed it to Murphy.  “This is the second time this week Sofie’s forgotten her protein shake.  Without Viv here to look after us . . . well, you don’t want to hear about that.”

Which meant the princess was Luciana Ross.  Ah, the wonders of deductive reasoning.

She prodded him back into the living room.  “It was awfully nice of you to drive over here for Sofie.  If she’d just eat the employee cafeteria food like the rest of us, but oh no, she thinks she’s fat.  She’s not fat.  She’s brainwashed.”  She fluttered a hand toward a stack of fashion and celebrity magazines.  “Poison, I tell you.”

Murphy agreed, but didn’t say so.  He was still trying to figure out how in the hell he’d ended up with an action heroine thermos.

She continued to ramble while shrugging into a shaggy, ankle-length fake fur coat.  Grape kool-aid purple.  “I, on the other hand, care squat about high fashion.”

Obviously, Murphy thought, as she snatched up a pink poodle purse.  He watched in fascination as she hooked a Hula Hoop over one shoulder, a patchwork tote bag over the other. “Could you grab my May Pole?  Thanks.”  Then she scrambled out the door.

It didn’t surprise him that she hadn’t asked him to shut it behind him, or God forbid, lock it.  Regardless, he turned the inside lock and closed the front door tight before tackling the porch and its compromised outer door, a five-foot, ribbon-wrapped pole and a video game star’s thermos in tow.  Hotfooting it down the steps, he slid his sunglasses back down.  Anonymity was a true blessing on days like this.

Luciana Ross moved pretty fast for a woman in a ball gown and heels.  When he reached the driveway she was stuffing herself into the driver’s seat of the pink Beetle.  Layers of crinoline puffed up and over the steering wheel.  She didn’t seem to notice.  She used her right hand to key the ignition, her left to gesture to the pole in Murphy’s hand.  “Just slide it in the back.”

He did.  Along with the thermos.  She’d be none the wiser.  The back seat of her car was as cluttered as her house.  He reached through the open front window, past layers of lacey pink poof, and shut off her car.

She winced.  “Please don’t call me that.”

Okay.  But he wasn’t going to call her “Princess” either.  He needed to get her head out of the clouds long enough to explain his presence.

“Lulu,” she said with a smile.  “Viv’s the only one who calls me Luciana and that’s only when I’m in deep doo.”

As in shit?  What planet did Lulu live on anyway?  Murphy raised an eyebrow.  “As a matter of fact—”

“I’d love to talk, but I’m late.  Maybe another time.”  She reached for her keys.

He closed his hand over hers, conscious of her delicate bones, satin-smooth skin, and the mouthwatering scent of tangy lemons.  He had the damnedest desire to flick his tongue over her pulse points.  Highly inappropriate given she was the principal.  Translation: Hands off.  “It’s important.”

“Murphy.”  Sensing he’d alarmed her, finally, he released her hand, bent forward and braced his palms on his thighs, putting himself at eye level with the woman.  He hadn’t decided yet whether to thank or curse Bogie for sticking him with this clueless ball of energy.  Instinct told him she was going to be a handful.  The convenience store mogul might have been a pain in his ass, but at least he hadn’t triggered any sexual awareness.

The left corner of her mouth quirked up.  Flecks of iridescent glitter sparkled on her pronounced cheekbones.  “Okay, Murphy.  Whatever problem you’re having with my sister, I can’t help.  Sofie has a mind of her own when it comes to men and relationships.  Nothing I can say or do will give you an edge on any of her other boyfriends.”

She shooed him away from her car and revved the engine.  “I can tell you one thing.  She tires quickly of pushovers.  Next time she asks you to run an errand, tell her you’re busy.”

And with that she stepped on the gas, leaving Murphy in the dust.

Or so she thought.